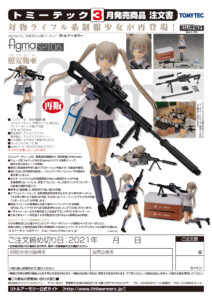 The anti-materiel rifle specialist dressed in school uniform is back for a rerelease.

The smooth yet posable figma joints allow you to act out a variety of different scenes.
A flexible plastic is used in specific areas, allowing proportions to be kept without compromising posability.

She makes use of drawer joints in her shoulders allowing her to easily wield the ‘Little Armory’ weapons.

A plastic model runner kit for a M82A1 semi-automatic anti-materiel rifle is included. The model is limited to the figma release and includes a short barrel for short-range combat, a new model muzzle brake and large sound suppressor as optional parts to attach to the weapon.

She comes with both a standard expression and an aiming expression for combat scenes.
An alternate head part and base are both included which allow you to pose her prone.
An alternate hair part with shooting glasses as well as a sports bag are also included as other optional parts.

The background sheet of the product features a papercraft kit to create a vaulting box.
The package includes an original illustration by illustrator Haruaki Fuyuno.

An articulated figma stand is included, which allows various poses to be taken.

– Who is the Little Armory’s Maria Teruyasu? –

Maria Teruyasu is one of the characters seen on the Little Armory packaging, illustrated by Haruaki Fuyuno. She is a student that specializes in sniping at Reiyou Metropolitan High School, and works primarily with anti-materiel rifles.